Managing nitrogen fertilizer is a topic that never seems to go away. I started research of nitrogen in 1978 – that was 42 years ago, and agronomists are STILL dealing with some of the same questions we were researching back then.

WHY IS NITROGEN MANAGEMENT SO HARD?

You may ask yourself, "Why does nitrogen fertilizer disappear from my field?"  Well, there are two causes – water and oxygen – its either too much or too little. Lets break it down to three common chemical forms of nitrogen found in fertilizers, and how they interact with water and oxygen. 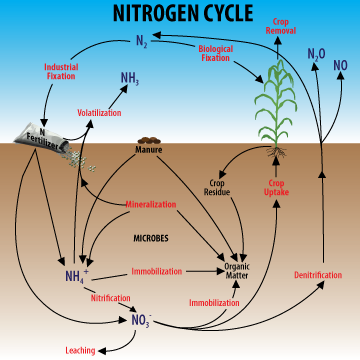 When we put anhydrous ammonia in a field, and inject it underground the NH3 immediately grabs a hydrogen atom from water, and is converted into ammonium, NH4+. The extra hydrogen imparts a positive charge to the molecule, which causes it to bind to clay and organic matter, and stick around. That’s a good thing. As long as the ammonia knife seals the trench there’s enough water around to convert the NH3 to NH4+ . It is important to inject the NH3 deep enough so that it interacts with water before it diffuses to the soil surface. This is usually not a problem, but it can be an issue with shallow injection on sandy soils.

So, once NH3 is injected in the soil everything is fine, right? Nope. Once NH4+ forms in the soil microorganisms start to work on it. If the soil is aerobic, not water logged, microorganisms will convert NH4+ to NITRATE (NO3-). This reaction is possible because microorganisms get energy from the conversion, in essence, they eat it. NO3- does NOT attach to the clay or organic matter, so it can leach out the bottom of the root zone, or out in the drainage tile.

But what about when the soil is not aerobic – say it’s a heavy clay and water logged, with very slow drainage? NO3- won’t go out the bottom of the root zone, right? Well, yes, it won’t go out the bottom, but it definitely won’t stick around. If microorganisms don’t have O2 (oxygen) in the air or water they will start using the oxygen on NO3- to breath, and turn the NO3- to N2 gas. The same N2 that makes up 78% of the atmosphere.

The final form of nitrogen commonly used is UREA, either 46-0-0 granules, or urea ammonium nitrate solution. What happens to urea in soil? The first step is breaking urea into ammonia by the urease enzyme. If the urea breaks down on the soil surface NH3 can go off into the air. Rain (about 1/3 inch) or mechanical incorporation can stop that loss, but many acres are no-till, and rainfall can be stubborn about timing. Once the NH3 from urea gets in the soil, it follows that same path mentioned above to potential losses as anhydrous ammonia.

So, nitrogen fertilizer is subject to losses above the ground and below the ground. How can these losses be mitigated? Two Words: NITROGEN STABILIZERS. Products like N-Veil® can reduce surface losses by inhibiting the urea enzyme, and products like Preserve N™ can reduce below ground losses from leeching and denitrification. Or there is VolTerra™ a newly released product containing a combination of the active ingredients found in N-Veil® and Preserve N™ to manage both above and below ground losses in one convenient product.

No matter what product you choose - its essential to protect your investment. Call your local Simplot Grower Solutions Crop Advisor today for the best recommendation for your field.

Dr. Gary Tuxhorn is our Technical Agronomist with focused support of Meridian Agriculture Distribution. Gary provides sound agronomic advice that resonates to both upper management and field staff alike. His approach and expertise delivers a clear understanding of complex topics and product info that all can appreciate and execute upon. Gary has worked on committees & groups on the national, regional, and state level with ARA, Agribusiness Association of Iowa, CCA, WSWS, and NCWSS. Dr. Tuxhorn grew up on a family farm in Eastern Nebraska, and attended the University of Nebraska and Washington State University.